How to View the Refugee Crisis: Compassion vs. Hate


Refugee Crisis and How We Respond:

The recent surge in refugees coming to the United States from Central America, mostly children, has been a topic of much discussion and debate across the country.  An oversimplification of the issue has led to an oversimplification of how to respond, with two distinct "camps" emerging: one epitomized by protesters blocking the road in front of the federal DHS detention facility in Murrieta, California, and the other made up of groups like Border Angels rushing emergency supplies to various overcrowded centers mainly between Texas and California.  I would like to offer my views on the two camps; one group that gathers energy from the darker corners of the soul, and one that comes from a place of compassion.

First, Remember Why They Came

There are many reasons people have come to this country over the centuries.  Sometimes it is the pull of what our nation has to offer, and sometimes it is the push of war or violence or famine in the home country.  Make no mistake about the current crisis:  it is not just a quantitative increase in the number of undocumented aliens coming to this country for work or for "a better life."  The unspeakable horrors of violence sweeping Central America recently, including widespread violence against women and children, is unlike anything that has been seen there in decades.  When the capital of Honduras is second only to Aleppo, Syria in the list of most murders, and when our own State Department declares that violence against women in Guatemala and across Central America has reached war-time levels, you can understand why people are fleeing, or sending their children abroad.  Would you do less for your child if she were statistically more likely to be sexually assaulted than find employment?  We can at least be aware of what conditions are behind the crisis as we formulate a response.  And we can remember that our own law compels us to listen to a refugee's plight before a decision is made as to whether to allow her to remain here or return.

I don't want to give this group of perhaps a few dozen any more attention than they deserve, which is already disproportionate.  But for better or worse, they have become the face of the opposition to the recent influx of mostly Central American children and to their continued housing and care in the United States.  It's tempting to describe this group, or any group, from the outside looking in.  To refer to the Murietta protesters as ignorant, or organizers of hate rallies, certainly helps frame the issue and your position.  But when you do that, you fall prey to accusations of exaggeration or bias.  It's a rare case where a group's own words suffice to describe the group, what they believe, and why you find it objectionable.  Here is one of those rare cases.  From a legal and philosophical point of view, this group undermines itself and paints itself in as bad a light as any of the counter-protesters could ever do.
To start with, the thousands of undocumented children who have recently surged across the border are not "illegal."  Why?  Because the acceptance of refugees and their right to petition for asylum or other relief is, quite literally, legal.  Does every single person qualify to remain in the United States?  Certainly not.  But those protesters who invoke the rule of law should perhaps brush up on exactly what the law is.  We as a nation acknowledge our obligation, legal and moral, to not return legitimate refugees to a country where they face persecution, sometimes death.  There is a process that needs to be followed, and that is what is taking place.  And that is the law.  So when a busload of detained aliens meets a crowd of citizens blocking a road and preventing federal agencies from carrying out their duties, only one of the two groups is breaking the law...and it's not the children on the bus.
Moving on to what the Murietta protesters say, in words, placards and actions, little commentary is needed.  "Go back to Mexico" being screamed at a bus full of Central American mothers and children.  "No more taxes, no more illegals."  "You're not wanted!"  They scream and point at buses as the traumatized faces of 12-year-olds look out.  They rail against "invasion" of their town, despite the fairly ironic reality that the DHS facility provides jobs and revenue to their community, and I'm unaware of any detainees who have seen downtown Murietta unless there is a view from the facility itself.
Do they have any legitimate reason to express concern over the influx of children from Central America?  Yes, they do.  We all do.  Even if we strip away concern for conditions in the home countries, there is certainly a valid concern for the effect on our U.S. resources, both in the short term (in terms of detention space, supplies, court resources, adjudicators of asylum claims, public health) and the long term (economic impact and other long-term resettlement-related strains).  But those are issues that are dealt with legislatively; through community-based organizing and coordination; by contacting representatives in Washington; and like it or not, by confronting the conditions back where the refugees come from.  Blocking traffic and screaming at buses does nothing.

This group of advocates is fairly small, but similar to the Murietta Protesters' role on the other side, they have become the face of those who have reacted to the influx of Central American refugees in a very different manner.  Their immediate focus has been on collecting supplies, including diapers and toiletries and clothing, and getting them to the detention facilities that have been hit hard with numbers well beyond their housing capacity.  They ran supply drives including on July 4, disregarding the traditional day off and the call of the beach and barbeque to drive around town picking up boxes and delivering them to DHS facilities, trying to coordinate with government agencies that are not always open to that level of direct involvement with its detainees.  Beyond the specific organization known as Border Angels, this camp is also made of up a large number of community-based non-profits and advocacy groups, and many attorneys offering pro bono consultations and representation for children who have no ability to navigate the complex world of immigration courts and the complex array of federal regulations that will ultimately determine if they will stay in the United States or are returned to their home country.
Are these advocates naive?  Perhaps.  Having worked with many, I think there is a good deal of naivete, accompanied by an unwillingness to listen to any opposing views or concerns.  That is, perhaps, their greatest weakness, because it provides their opposition with easy talking points and some legitimate claims of being the only realists in the room.  But from my point of view, a certain degree of naivete often makes the best advocates and activists.  Realism can, quite frankly, be a real bummer and a sure way to become disillusioned and overwhelmed.  It's like that story of the boy throwing starfish back into the water after they were washed up on shore; when a passerby pointed out that there were countless starfish on countless beaches and the boy would never make a difference, the boy just paused and then replied, "But I made a difference to that one."  We need more boys on the beach, and Mother Teresas in the streets, even if we never help every starfish or bring comfort to every destitute person dying in the street.  That sentiment probably says a bit about my own naive idealism, but I'm fine with that.

I am sure that there are many people across the country whose views fall somewhere between the two camps described above; either because they don't fully understand the issue, don't care about the issue, or just find both to be extreme in their own way. But for now, these have become the faces of the two views on the current crisis.

Where my loyalties and sympathies lie is not a difficult choice for me.  When the choice is compassion vs. hatred, compassion will always win.  That is the side I will always choose, I hope, whatever the issue.  That is the side that is demanded by my own heritage, my upbringing, my profession and my faith. It is also the side favored by history.
If you haven't decided where you fall yet, I hope compassion leads you to the right decision, for the right reason. 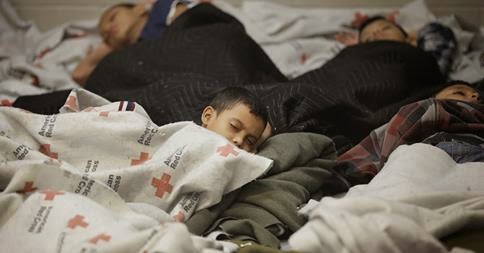